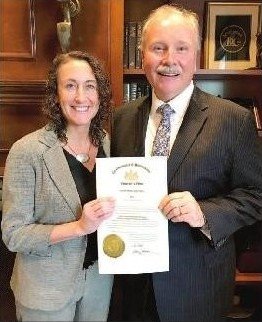 Gov. Tom Wolf has appointed Dr. Patrick M. Murphy to the State Board of Examiners in Speech-Language Pathology and Audiology.

Dr. Murphy was confirmed unanimously by the Pennsylvania Senate Wednesday, Oct. 23. He was recommended for the position by state Sen. Steve Santarsiero.

Dr. Murphy is a private practice audiologist and owner of Murphy Heari8ng Services in Doylestown since 1987.

Dr. Murphy will donate all stipends from this appointment to the many charities listed on his practice website.

A resident of Richland from 2000 to 2015, he served on the Richland Township Water Authority from June 2002 to December 2003 and was the only official to refuse payment for his work.

The State Board of Examiners in Speech-Language Pathology and Audiology regulates the practice and licensure of persons offering speech-language and hearing services in Pennsylvania.

Back to home page